In this ground-based image, Charlie and Thomas Benton, my kite aerial photography partners, are pointing to a Tom McAlister kite train at the Berkeley Waterfront.

This section of pages contains images from my kite aerial photography efforts. Each of the links below leads to a group of four to eight images. Click on the small inline image to see a larger version. So far, the images in the Gallery are my own. However, I am very interested in displaying your images as well. If you have kite aerial photographs that you could contribute to these pages, please send a note via email.

The roster below organizes my gallery pages by topic. A chronological roster is available on the KAP Home Page. You can also take a peek at shoots that have yet to make it to gallery pages by visiting my Queue Page or a new section featuring Thumbnail Galleries..

SAMPLERS of my BEST KAP IMAGES (c. 1997)
I culled through all of my images in 1997 to select a set for display. This was sufficiently entertaining that I cast the images forward in a series of sampler pages. I need to add images from the last five years. In the meantime you can also take a look at my image folders on photo.net.

The UNIVERSITY of CALIFORNIA, BERKELEY
Since I live next to and work on the Berkeley Campus it is natural enough that I've turned my kite camera toward this photogenic target. Beginning in 1996 I began what will probably be a multi-year project of shooting the lair of the bear from the air. We are blessed with a photogenic campus that I find entertaining to photograph.

Autumn Shots of the Campanile, October 1996

BERKELEY, CALIFORNIA
After 12 years Berkeley has become our hometown and a fine one it is too. The kids and I have learned the techniques of kite aerial photography by wandering around Berkeley and flying here and there. These pages present bird's eye views of Berkeley captured in such outings.

Near the Pacific School of Religion #2, March 1998

Near the Pacific School of Religion, March 1998

Above the Berkeley Yacht Club, June 1996

Images from a Berk. Afternoon, March 1996

SAN FRANCISCO, CALIFORNIA
One of the nicest aspects of Berkeley is its location just across San Francisco Bay from the city of San Francisco. The city (as we call it) is a great place to visit and we make it over there around once a week. These pages will chronicle my ongoing KAP exploration of the city.

OAKLAND, CALIFORNIA
Oakland lies to the immediate south of Berkeley and has its own distinct character. We will try to capture some of it.

POINT RICHMOND, CALIFORNIA
Point Richmond is a quirky little community with a vivid history that runs from vice and land speculation a century ago to industry at mid-century to residential development and sailing today.  I've accrued quite a few images during my Sunday trips to Pt. Richmond for the boy's Junior Sailing Program.

MARIN HEADLANDS and the
GOLDEN GATE NATIONAL RECREATION AREA (GGNRA)
The Marin Headlands lie just to the north of the Golden Gate Bridge. The headlands are covered with old military installations. An easy drive from Berkeley, they are a frequent destination for Sunday afternoon picnics. What's a picnic without flying a kite? Also included are other sites within the GGNRA including Mt. Tamalpais.

POINT REYES NATIONAL SEASHORE
The Pt. Reyes Seashore is by any account a special place. Over the last twelve years we've averaged over a dozen trips to Pt. Reyes per year. When I was first musing about kite aerial photography an ongoing documentation of the Pt. Reyes landscape immediately came to mind. I consider this a twenty year project.

During the summer of 2000, Claudia, the boys, and I accompanied a dozen undergraduate architecture students from UC Berkeley on travels through Berlin and Paris. The Bentons four then continued to Chinon, France and a bit of Normandy. In 2001, Claudia and I made a similar trip to London and Oxford with a preliminary stay in Lyme Regis on the coast of the English Channel. These pages contain images from those treks.

The Vineyards north of Chinon, Aug. 2000

BEYOND the BAY AREA
In the summer of 1996 Claudia and I took a blissful vacation to Hawaii. Since that trip I have found several opportunities to travel with my KAP gear. These pages contain images from the road.

A Trip through the American Southwest, October 1998

MISCELLANEOUS
Herein lie photographs that fail to match the other categories. I guess almost any endeavor offers its miscellaneous items.  In this case it is photographs ranging from craked mud textures to a WWII biplane.  I'm beginning to work on traveling with the kite and camera gear. With luck this section will expand.

I took this shot late in the day at the end of the Berkeley Pier. The wind was failing while the light improved and this made for an interesting time. I would be on the verge of taking an image when a lull would hit (you could see them coming across the water) and all attention would have to be given to the kite. The possibility of seeing my rig hit the salt water was sufficiently real that I threw in the towel after taking three frames. 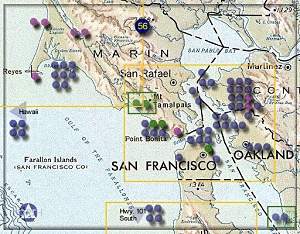 A reduced version of the top-level gallery key map. The map set zooms down through five different scales to provide detail where appropriate.

Since most of my kite images are from the San Francisco Bay Area, I've assembled a set of maps showing the approximate location of each gallery page. A good place to start is the top-level map of the Bay Area.