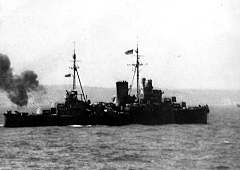 The British cruiser Ajax photographed on D-Day. Its job was to cripple the Longues Battery and this was handily accomplished with the westernmost bunker.

Our brief visit to the Longues Battery occurred on a relatively still day with a hazy atmosphere. The preceding week had found me in similar conditions during a visit with fellow KAPer Christian Becot. Christian had encouraged me to loft the rig by running in still air but I was reluctant due to concerns about keeping the rig in good shape for UNESCO duty. The Longues visit, however, was at the end of the trip so Charlie and I decided loft the camera by running the kite down the road.

Ground-level views of the Longues bunker with destroyed gun visible on the ground and your author watching a languid kite barely hang in the air  (Canon S100, July 2000)
So I ran the kiteline down the road to lift the kite. And the kite lifted the camera. And Charlie ran the transmitter. And we got the aerial shots shown below. We used the carbon-framed Rokkaku as a lifter and it worked well. When I slowed my running the camera came down in a quick but controllable fashion.

On the left a view from behind a bunker toward the ocean. The bluff edge is visible in the distance with a field of grain lying between bunker and bluff. On the right is an oblique shot of another bunker from behind with a field of young corn in the background. The bunker's rear, split entry is evident by the paths as is access via earth berm to the roof.  (Canon 24-mm, July 2000)