During July 2000 I had the fine good fortune to take Claudia, the fils Benton, and a dozen Berkeley undergraduates to Europe. We had a splendid time. Part of my trip was documenting a section of the Val de Loire for inclusion in the UNESCO World Heritage Site program. This meant I had the kite gear along and I was able to loft a camera in Berlin, Paris, the Loire Valley, St. Malo, and the Normandy Coast. This page documents the first of my European efforts -- quick shots of a German AtlantikWall battery on the Normandy Coast.

Charlie and Thomas walking on the command bunker (left) and the bear-sized rabbit hole (right) was created on D-Day in 1944 when the British cruiser Ajax was assigned to bombard the German Battery at Longues   (Canon S100 left and Canon 24-mm right, July 2000)

Driving up the languid coast of Normandy on a fine summer afternoon it is hard to imagine the mayhem underway at this spot 56 years ago. I found a brief describing the battery at a combat game site developed by Dominique Légé. The Longues Battery was part of the Third Reich's Atlantik Wall system and in the Spring of 1944 stood ready to repel an Allied invasion. Located between the British Gold and American Omaha beaches, the battery was made up of four casemate-sheltered guns located a few hundred meters from the ocean bluff and a command bunker with lookout facilities on the bluff itself. This is the only Atlantik Wall defense work that still has its cannons, in this case 155-mm TK (Torpedo -Kanone) C/36 guns manufactured by Skoda at Pielsen. 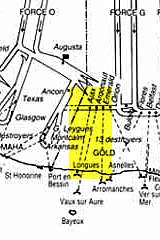 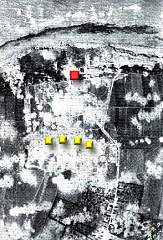 On the left is a snippet of the battle plan for the Normandy invasion showing the lines of engagement between the cruiser Ajax and the Longues Battery. On the right is an aerial reconnaissance image taken 15 June showing the effects of bombs and shelling around the battery. The locations of the gun batteries are marked with yellow pins while the observation post is in red.

Construction of the battery began on March 2th and  3000 m3 of concrete was used for gun casemates resulting in concrete wall around 1 meter thick. The control bunker contained 720 m3 of concrete. Not surprisingly, most of these structures survived the war largely intact. Or perhaps it is something of a surprise. Before the D-Day invasion the RAF dropped 1500 tons of bombs on the battery. Some weighed more than two tons and craters were reported up to 7 meters in diameter. The US Air Force sent 127 bombers on D-Day morning to drop another 600 tons of bombs. The net effect of this havoc was that the gun were still operational as was the command bunker. The bombing did, however, sever telecommunications lines and this caused coordination problems in aiming the guns.

Year 2000 views of the bunkers toward the east and west. The lefthand shot shows the westernmost bunker only. This is the one hit by the Cruiser Ajax. The righthand shot shows all four bunkers with the one kyboshed by the Ajax in the foreground  (Canon 24-mm, July 2000)
The battery of Longues-sur-Mer had a short but active role on D-Day. At 5 o'clock, the battery opended fire on US battleships Arkansas and Emmons and apparently bracketed on ship with shells. It surrendered on June 7th  when the 47th RM British Commando unit approached. In the meantime, however, the British cruiser Ajax was able to score one direct hit on the westernmost gun bunker with devastating effect still visible today.

Contemporary ground-level views of one of the Type M272 bunker at the German Battery at Longues   (Canon S100, July 2000)