When we first arrived at pueblo bonito I was eager to get a camera aloft. The winds were fitful -- nothing new on this trip -- so I selected the Sutton 60. I was aware of a man on the edge of the mesa above setting up a view camera to photograph the late day scene. Understandably, he thought my brightly colored nylon would seem out of place in his 4x5 photos. After a bit of shouting -- he was 100 feet or more above me --  we worked out an arrangement that I would back the kite out of view whenever he was about to shoot.

Up went the Sutton 60 in all of its colorful glory and I commenced my usual 10 minute warm-up, see-if-the-kite-is-happy waiting period. About ten minutes into the test flight the kite suddenly separated from the line and drifted downwind over the desert floor. Turns out I had forgotten (duh) to close the snaplock on the swivel I use to connect kite to kiteline -- good thing the camera was not aloft. It was easy to track the kite down and 15 minutes later all was well.

A high altitude view of pueblo bonito in Chaco Canyon. Imagine that you are a drifting kite.  (Canon 24-mm, June 1998)

Later that afternoon I talked to the view camera guy. Our sharing arrangement had worked well and he had come by to check out the kite gear. He said that he had been able to figure almost everything out by watching me from his vantage point on the bluff. He did have one question: "Why did I send the kite to altitude and then release it?" It is standard procedure, of course.

The Chaco Canyon trip was a great success and I long to return. At night the dry desert sky turns a deep, dark black and the stars emerge as they cannot near a city. I was so inspired that I later bought a small telescope. Now, to find the time to go back.

Here is a ground-level view of pueblo bonito taken from the jagged remains of Threatening Rock. The geometry of the "great house" is much more apparent from the air  (Canon 24-mm, June 1998) 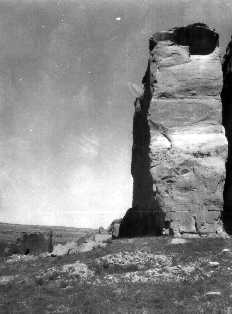 An old photograph of Threatening Rock when it was still threatening

For most of pueblo bonito's existence the building complex shared the landscape with an enormous block of sandstone named Threatening Rock. Prior to its collapse in 1941, the rock was a detached segment of the cliff wall that was separated from the cliff by a wide crack. It measured about 97 feet high, 140 feet long, 34 feet thick, and weighed an estimated 30,000 tons. The Anasazi builders chose this location even though they recognized the threat of a fall. They built a supporting masonry terrace below the rock, which slowed the erosion of soil from below the rock, delaying its collapse.