For the second year now the young Bentons are participating in the Junior Sailing Program run by the Richmond Yacht Club. This is a delightful program run by Larry McCollum and Tom Carlon from October to April of each year. Charlie and Thomas each have a diminutive El Toro, the standard dingy for the first years of the program. Later they graduate to Lasers. The juniors meet at the yacht club every Sunday morning and have their boats rigged by 9:30 am. The remainder of the day is spent in instruction and sailing. Parents volunteer time to the program for some days and on others they are left to their own devices -- like as not the flying of kites in my case. 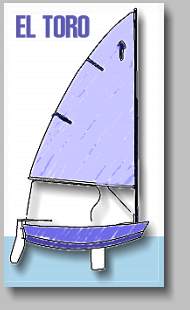 The El Toro is designed to be entertaining and easy to transport. Most yacht clubs in San Francisco Bay use El Toros for their junior sailing programs. The one design class goes back to the 1930's. It was intended to be a boat that could be built in a backyard from 4x8 plywood. Today many El Toros are fiberglass, but wooden boats are still in abundance, and still competitive in races. The length overall comes out to be just under 8 feet. In California (and most other states) the size means it does not need to be registered with the related fees and paperwork.

Charlie and Thomas each have a well-worn El Toro. The Richmond program does not maintain its own fleet of boats, instead preferring participants to have their own. Their reasoning is that starting with their own boats instills a sense of pride in the young sailors (quite so!) and offers them an opportunity to learn useful rigging and repair skills (doubly so!)

The Richmond Yacht Club's fine outdoor decks (at left) cover three levels including the dock and on the right El Toros round the mark in an informal race (44K jpg left and 25K jpg right, Canon 24-mm, November 1997).

So it is not unusual for me to find myself out at the yacht club with a bit of time on my hands. On such occasions up goes a kite. These shots provide plan views of the yacht club's very pleasant outdoor decks (with El Toros on the lowest dock) and the El Toros under sail. I plan to shoot another roll of the El Toros racing. The image to the right would probably have worked out much better with a 50-mm lens as opposed to the 24-mm lens used.

Tom, the intermediate group instructor, peers up while stowing his El Toro on his pickup truck and, on the right, full scale sailboats lend a sense of scale to the El Toros (25K jpg left and 32K jpg right, Canon 24-mm, November 1997).

I was wandering around the parking lot when I took this shot of Tom loading his El Toro in the back of his pickup truck. The little boats are nicely portable. The plan view of "A" dock on the right provides an interesting sense of the El Toro's small scale by comparing them to larger boats in their slips. It is a bit tough to tuck one of the larger boats in the back of a pickup truck.

A shot of the yacht club's front lawn where sails are often folded. Below the American flag the folding of an El Toro sail is in progress (40K jpg, Canon 24-mm, November 1997).

There is something challenging about placing the camera rig next to the top of a flagpole. I think it is because flagpoles provide a target that is relatively easy to approach and the flag a bit of animated color. While I have dozens of such images I've decided that don't really like them that much. I will continue to take them anyway because they are just plain fun -- and provide useful practice in maneuvering near fixed objects. In this image the kids that were following me around the parking lot are gathered at the base of the flagpole.