The Campanile of UC Berkeley, officially named Sather Tower, is the central landmark of our fair campus. Designed by architect John Galen Howard, the 302-foot high tower was completed in 1913. The animation below show snippet from Facade, a computer-generated movie derived from a three dimensional model that was in turn derived from photographs including kite photographs.

From my earliest musings about kite aerial photography I imagined the Campanile as an intriguing target. One of the first kite aerial photographs I encountered was Craig Wilson's remarkable shot of the Wisconsin Capital Building dome with its guilded statue as a foreground object. On seeing Craig's fine image, I immediately thought of the Campanile's handsome bronze lantern as a Californian equivalent. Could one get a camera close to the lantern to capture its fine bronze proportions in the foreground with the campus in the background? So over the last couple of years the Campanile has been one of my favorite KAP targets (see earlier gallery pages). I imagined it to be a multi-year, ongoing project and that has come to be. The process dramatically escalated in the early months of 1997.

In February I received an e-mail message from Dr. Paul Debevec, a post-doc in UC Berkeley's Computer Science Department. Paul had come across the KAP WWW site and thought we might have some common interests. It turns out that a major thread of his work, indeed the work of a group, is the construction of three-dimensional computer models of architectural landscapes using only photographs as input. It also turns out that one of Paul Debevec's demonstration projects is the development of a computer model of Berkeley's Campanile. His presentation of the technique made my head swim. One or more photographs are scanned into the computer and then correspondences are established to recover a three-dimensional computer model. They then map surface textures from the photographs onto the surfaces of the solid model. Using fast Silicon Graphic hardware Paul's team can animate fly-bys in real time. 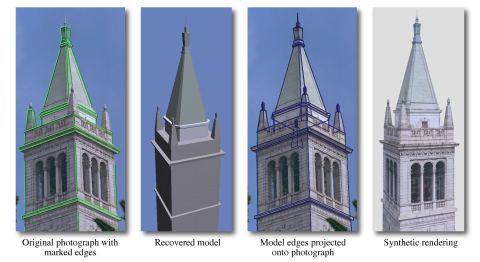 One hindrance to Debevec's interesting approach is the difficulty in obtaining information about the upward-facing surfaces in the model. It is reasonably straightforward to acquire ground-level views as inputs by taking photographs as one walks around the building. But the acquisition of aerial photos is another story. Gosh, I wonder if we can figure out a convenient, low-cost method to acquire low-altitude, still images of building scale objects like the Campanile?

Right: your author inside the lantern at the apex of the Campanile's roof. I've been working for some months to place a camera just outside this magic spot while flying from the ground 300 feet below. Left: Paul Debevec in the diminutive spiral stair tucked inside the northeast column of observation level. (April 1997, 26k jpg left, 36k jpg right).

Clearly, kite aerial photography can contribute to the method developed by my computer science colleagues. Indeed, images I have been pursuing for compositional purposes are essentially the same images they were seeking for input. Paul kindly asked if I'd be willing to work on the project -- he would have had to beat me with a stick to keep me away.

This section of the KAP WWW site will document the kite-related activities of the Sather Tower Project -- sort of a working diary. Already the project (inserted into an already frantic semester) has been a major catalyst for developing kite aerial photography techniques that are new -- at least to me. In six weeks I've flown and photographed from the top of the Campanile, conducted my first trials with transmitted video as an airborne viewfinder, taken my first manual exposure aerial images, and worked out a camera positioning technique involving IR laser rangefinders and a slide rule -- great fun indeed.

So begins my first serious project turning kite aerial photography to practical goals. Check in every now and then to see how we are doing.